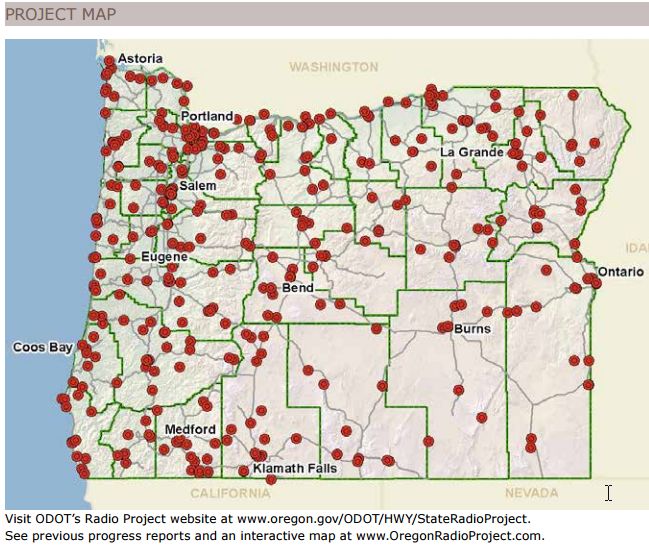 Oregon’s State-wide Radio Project links the state’s public service agencies. The project should be completed by the summer of 2016. 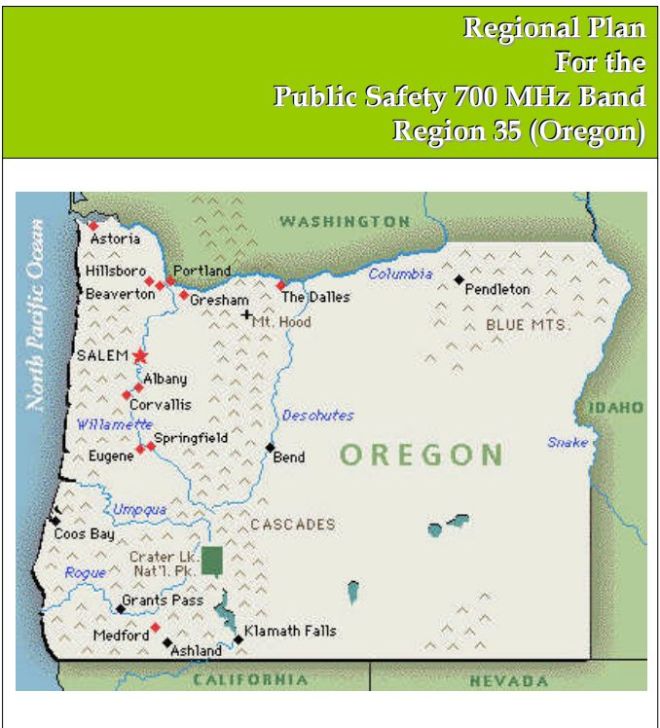 Washington’s OneNet is a similar state-wide public safety wireless, broadband network for emergency responders. The difference: it integrates with FirstNet, the nationwide 700 MHz network that uses a dedicated LTE band for interoperable data and cellular voice. 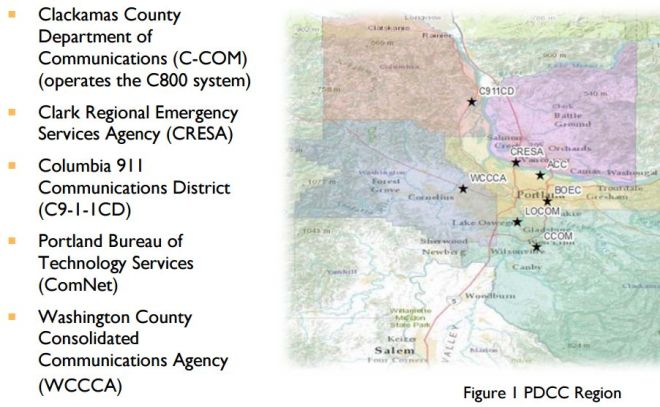 The Portland Area has the largest Land Mobile Radio (LMR) system in Oregon, and provides both voice and mobile data using the Motorola Smart Zone system but it does not include the LTE band for broadband data communications.


Radio Scanner apps for Android and IOS smartphones are a good alternative to buying a handheld scanner — but they REQUIRE internet access. Handheld scanners don’t. 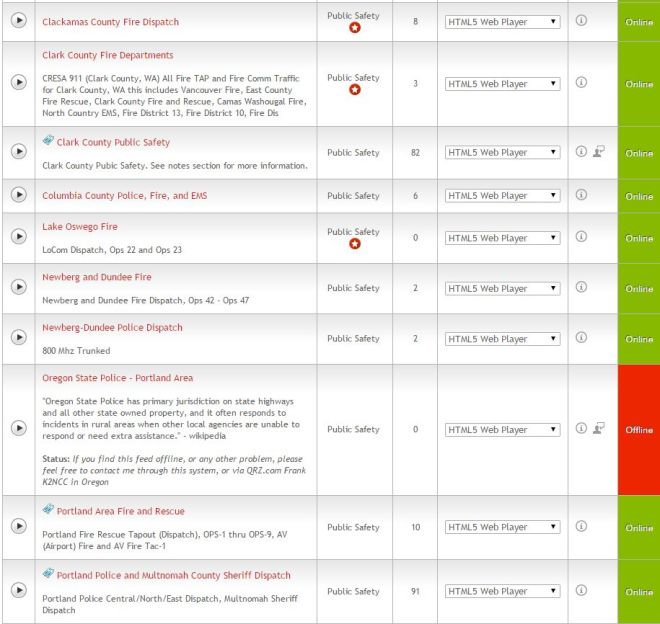 With few exceptions, such as the VHF Aircraft and Marine bands, almost every other VHF or UHF radio system uses some form of coded squelch. By far, CTCSS is the most popular mode among non-trunked systems. It uses sub-audible (below 300 Hz) tones to activate coded receivers. PL (Private Line) is Motorola’s trademarked name for this system.


A trunked radio system allows sharing of relatively few radio frequency channels among a large group of users, but many unrelated conversations can occur on a channel. Some radio scanners can “trunk track“, storing individual talkgroups just as if they were frequencies. Multnomah, Clark, and Clackamas use the Motorola Type II SmartZone system in the 800 MHz band. Motorola’s Smartnet trunking system uses microwave or land-line data circuits to provide multi-site wide-area communications.


Here are maps of Washington’s Coastal Repeaters, Oregon’s repeaters, and Oregon’s state-wide 700 MHz network for public service users (just to get the lay of the land). These networks will be the region’s communications backbone in a real emergency. 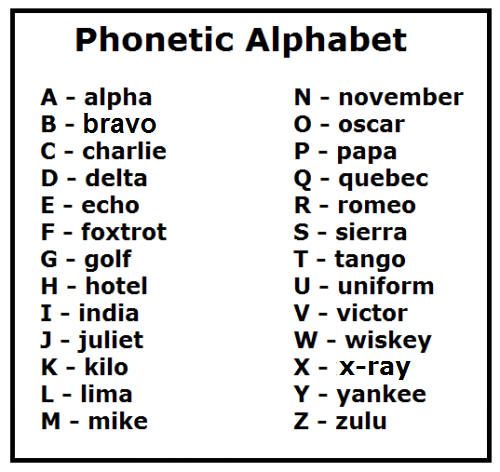 Walkie Talkies
Walkie Talkies, available at any big box store, don’t require a ham radio license. These common radios cost $30-$50 a pair using the GMRS/Family Radio Service. They use the UHF band, around 462 and 467 MHz, which does not suffer the interference effects found on citizens’ band (CB) at 27 MHz, or the 49 MHz band also used by cordless telephones.


You can get somewhere between 1/2 mile to 5 miles (or more). They’re handy, especially if cellular and land-lines are down.


If you’re on Hayden Island or Bridgeton, using GMRS/Family Radio Service walkie talkies, the official talk channel is Channel 2 (462.5875), while Kenton and Portsmouth use Channel 3 (462.6125). 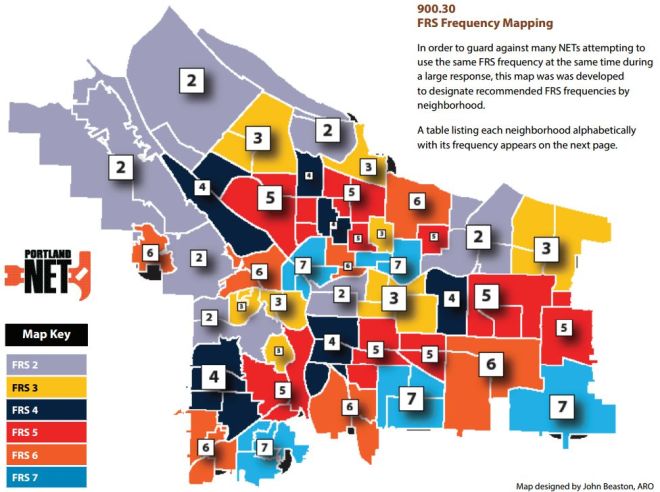 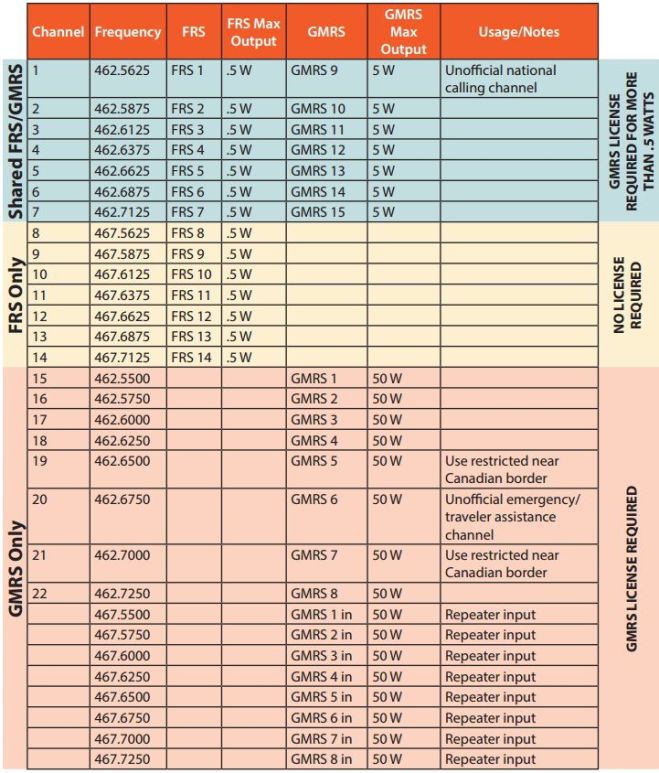 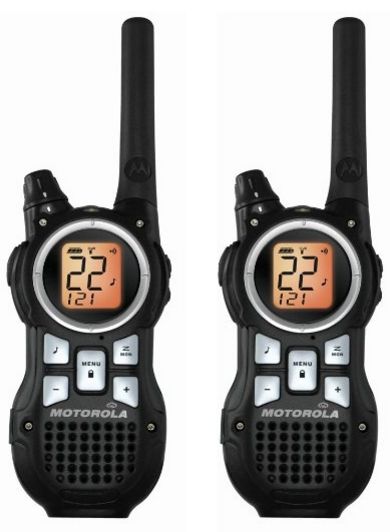 
Ham Radio
When power, cellular phones, cable, and the internet are out, ham radio can save the day. Ham radio provides local as well as regional/national communications. Newer digital modes can even send emails and photos. Here is a list of Regional Frequencies.

The Neighborhood Emergency Communications Training Net (NECTN) meets 8:00 PM every Sunday on the air on the 147.040 MHz repeater system of the Amateur Radio Relay Group (ARRG). Because this is a repeater, you need to set your radio to transmit with a +600 kHz offset, which is standard for this range of frequencies, and with a “PL tone” of 100.0. Multnomah County Amateur Radio Emergency Services (ARES) hams will recognize this as [regional template channel 68, alias “MC-6”]. 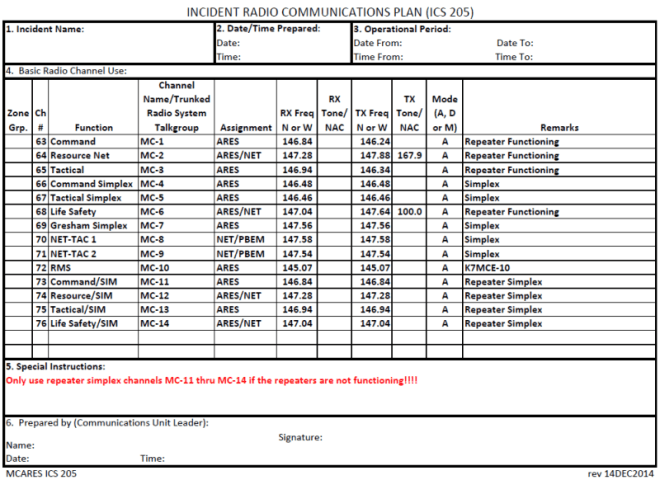 
The NET ARO Standards Program has two primary objectives: (1) Give licensed amateur radio operators the training they need in order to operate during an emergency (or confirm that a volunteer has already reached that skill level); and, (2) Ensure that every NET carrying ARO credentials has the same base skill level. 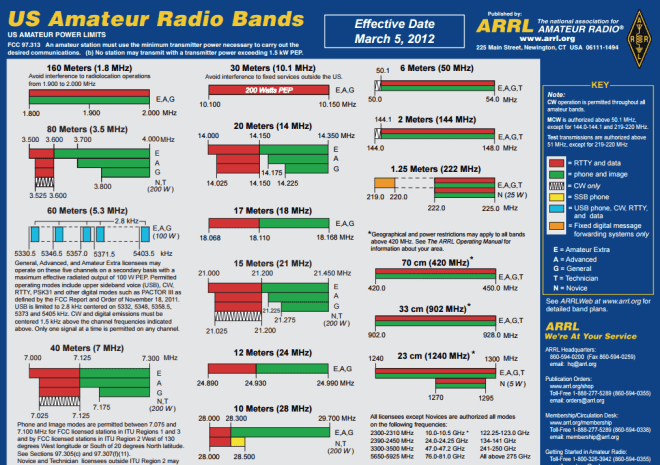 Ham radio licenses cost about $15. They are good for 10 years and require you pass a written test. Ham licenses are available in three levels (1) Technician, (2) General and (3) Extra. The Extra Class license is the hardest to pass but has the most privileges and can operate on the most bands. Ham licenses now DO NOT require you to learn Morse Code.

NET training to become an ARO includes on-line training and classroom work in Portland where you demonstrate the skills to the satisfaction of the Radio Training Liaison. Your Liaison then sends your Team Leader confirmation that you are ready to receive your ARO credentials. 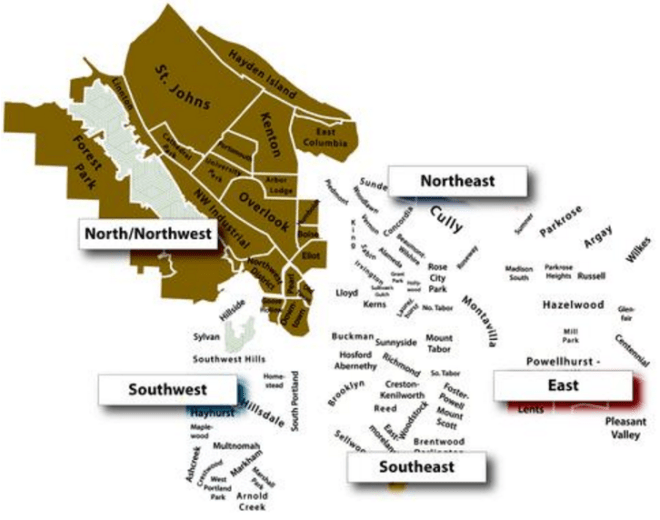 
FEMA online independent study certificates that cover Incident Command protocols and message handling are available at https://training.fema.gov/is/nims.aspx. They include:

The primary (emergency) frequency for the ECC is the Multnomah County Secondary Repeater (MC-2), at 147.280 MHz. It uses a repeater frequency offset of + 0.600 MHz and a Tone of 167.9. The fallback channel for ECC ham communications is (MC 5), a simplex channel with a Frequency of 146.460. AROs should attempt to make contact with the ECC via the following channels in the order listed: 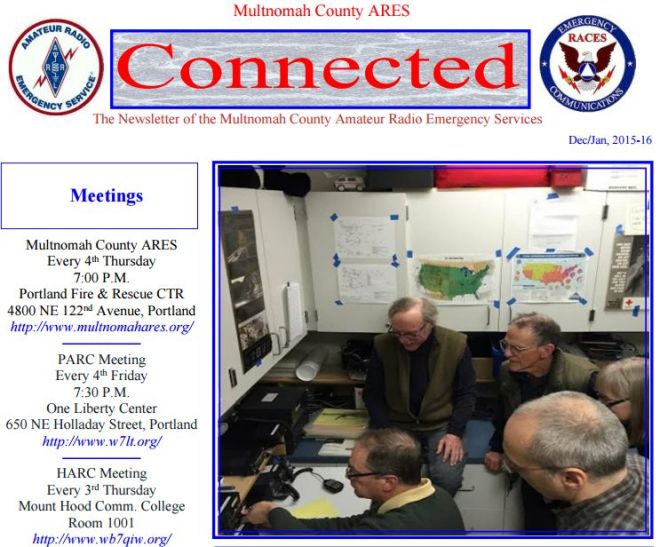 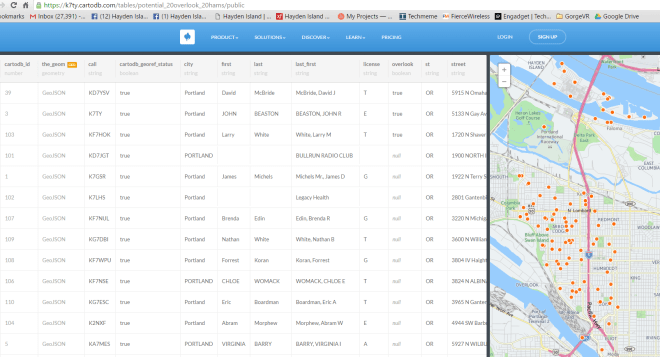 The Baefeng UV-5R, for about $30, is an inexpensive, handheld ham radio.


The Multnomah County ARES/RACES Website has information on the Amateur Radio Emergency Service® (ARES) and RACES, the government arm of amateur emergency services. Mult Co ARES has monthly meetings on the 4th Thursday of the month at 19:00 at the Portland Fire & Rescue Training Center, 4800 NE 122nd Avenue Portland. A weekly radio net is held on Wednesdays at 19:00 on the W7LT 146.84- repeater.


Candidate Amateur Radio Operators (AROs) must complete NET ARO operations training from her/his quadrant ARO. Upon completion of training the candidate is given ARO designation and badge and may then use the Fire Station VHF radio to contact Team Leaders, Emergency Command Center and other Neighborhood NETs. 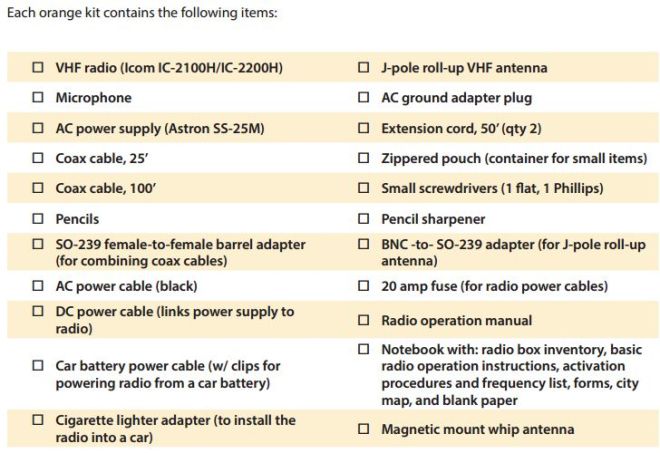 Every fire station in Portland has a VHF radio “go-kit” stored in an orange plastic pelican case. That radio can be attached to the station’s external antenna. This equipment is available for NET ARO for use in a disaster. 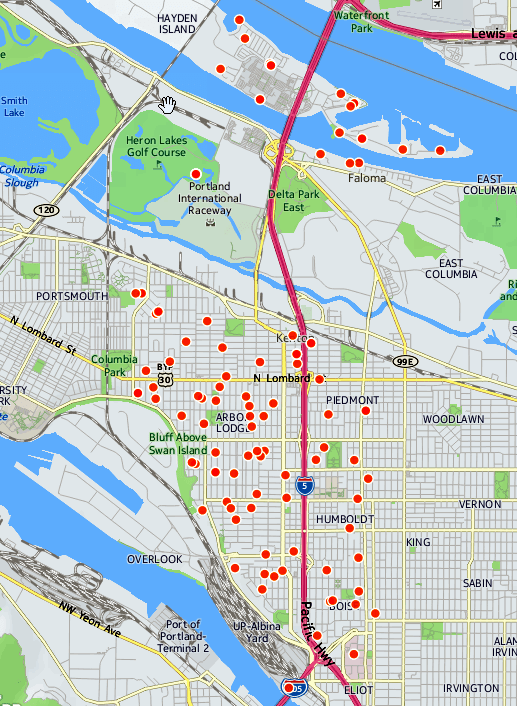 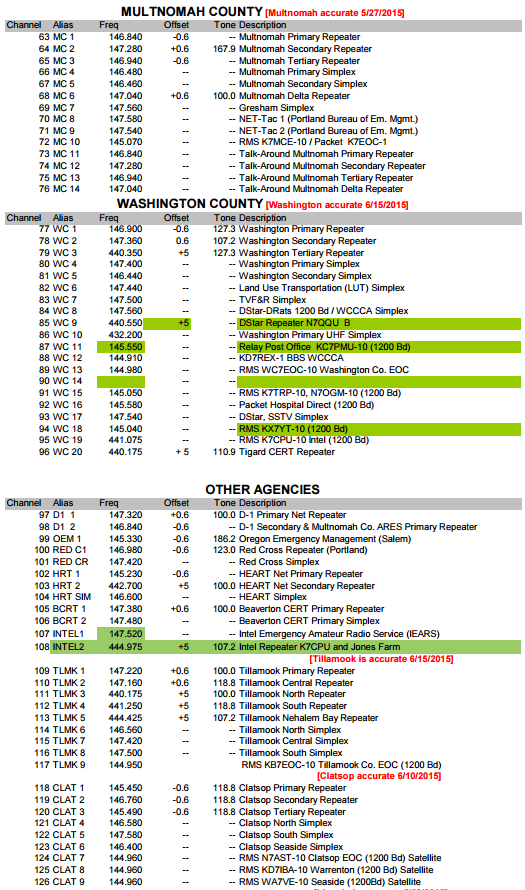 A solar powered ham station is one way to go.

How Repeaters Work
Two radios can’t talk at the same time on the same frequency. Repeaters are often placed high on a hill so their range is increased.


If a repeater re-transmitted your signal on the same frequency, it would just cause interference. Consequently, repeaters generally “listen” on one frequency (in the valley below) and simultaneously transmit that signal on an adjacent frequency (called the “offset”). The “offset” is your radio’s talk channel. It will be above or below the repeater’s transmitted channel. In the 2 meter band, you generally transmit with a +600 kHz offset (600kHz higher than the repeater frequency). 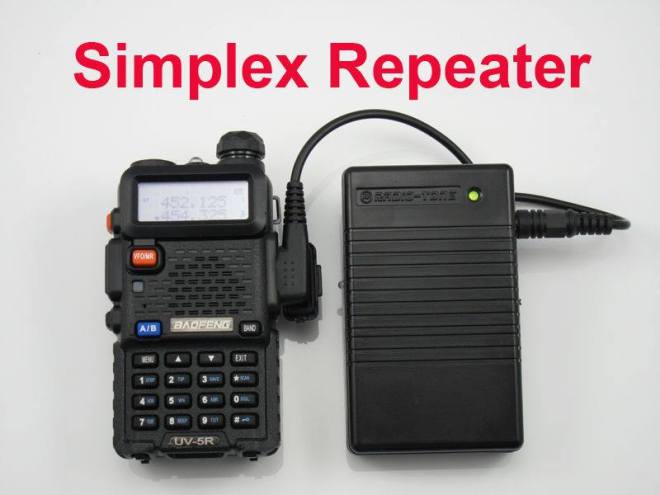 A simplex repeater uses only one frequency. It records incoming transmissions and retransmits them on the same frequency immediately after the original transmission ends. This has the effect of doubling the time required to transmit a message, but while a traditional repeater typically costs thousands of dollars and might be semi-portable at best, a simplex repeater costs less $70 or so and can be set up with a $30 Beofung radio and operated from batteries. Put it up high and you might easily get a range of 5 miles in all directions.


Typical Radio Procedures
After checking in with the Resource Net Controller (or attempting to check in) the ARO switches over to the tactical net reserved for PBEM at MC 6, followed by MC 7 if there is no answer at MC 6. The ARO will check in with the PBEM Tactical Net Controller, sited at the ECC, and repeat the same information given for the Multnomah County Resource Net check in. 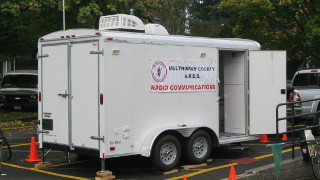 An ARO may deploy to the NET Staging Area, remains at home with radio equipment, or deploy to the nearest fire station to use the radio kit. Any option that works best for the team is appropriate, as long as the ARO and the Team Leader are in communication with each other. 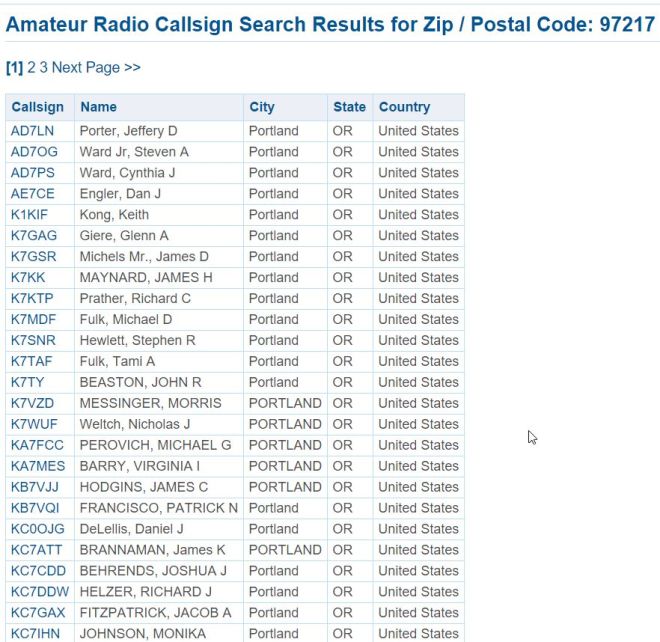 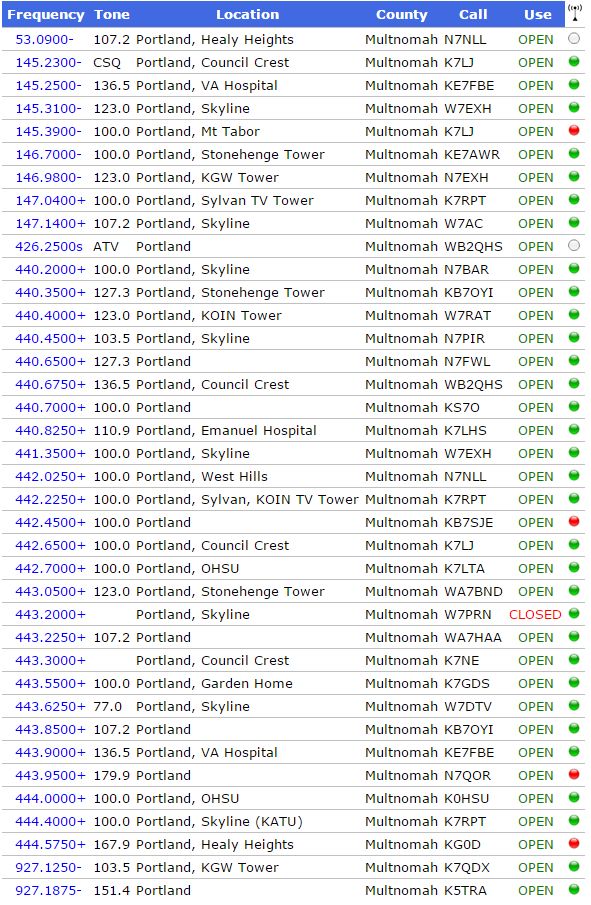 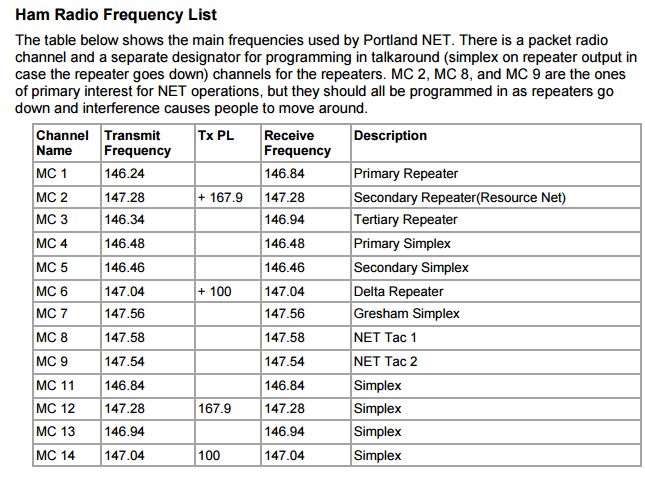 Programming your Ham radio
For ham radio communications you generally need to program in three things on your radio; (1) the frequency, (2) the frequency offset of your repeater (not required for single channel – simplex – communications), and (3) the frequency of Continuous Tone Coded Squelch, or PL tone, to activate your radio or repeater. Among other things this sub-audible tone prevents the repeater from accidentally triggering from radio interference that doesn’t have the tone.


CTCSS (Continuous Tone Coded Squelch Systems), also called Private Line (PL) codes are used both in handhelds and repeaters. It allows a radio to receive only signals with the proper “Tone”. This allows distant repeaters using a different CTCSS to co-exist on the same frequency. Some, but not all, repeaters will transmit a CTCSS Tone back.


These squelch tones also allow users of handheld units to form “talk groups” that only they hear. It doesn’t allow more people to use the same frequency, it just cuts down on the “noise” of other conversations.

If the repeater you are trying to listen to is not transmitting a tone, but you have programmed your receiver to require one, you will not hear that repeater. For most simplex (single channel) communications, DO NOT initially program your radio’s receiver to require a tone. Hearing everyone is a good thing to avoid doubling up. Most repeaters require both subaudible tones and a frequency offset. On 2 meters, the frequency offset for the repeater is generally 600 KHz (+ or -) from the main channel. 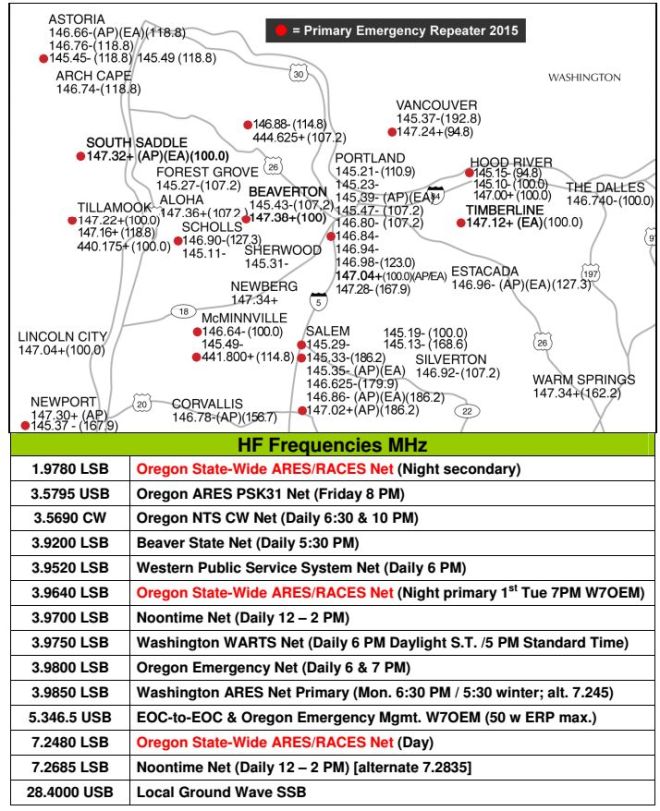 The Evergreen Intertie is an interconnected group of amateur radio repeaters for the Northwest. FM repeaters in the VHF and UHF bands are interconnected (linked) by full duplex UHF radios so everyone from Seattle to Southern Oregon can be heard on the net (or with a scanner). To establish the various repeater connections, users of the system must send commands to a controller commanding it to add or drop repeaters from the common Intertie connection.


Advanced Ham Radio Functions
The Automatic Packet Reporting System (APRS ) allows any station, radio, or object that has an attached GPS to be automatically tracked.

The most visible aspect of APRS is its real-time map display. Messages, alerts, announcements, and bulletins can be automatically geo-located. 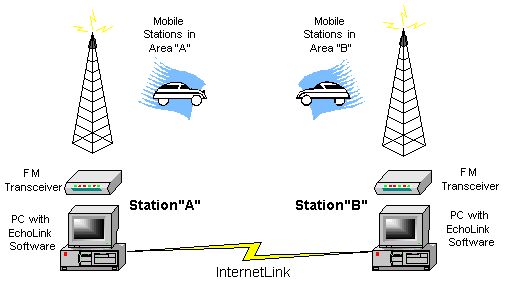 EchoLink REQUIRES a working internet for the interconnection.

When voice became digitized on the ham bands, it meant that it could easily be interconnected using the internet and voice and data could be integrated together, not unlike voice over LTE connections in cell phones. D-Star (Digital Smart Technologies for Amateur Radio) utilizes digital voice and data for amateur radio. Since everything is digitized, voice, GPS, pictures, and even spreadsheet data can be transmitted. The system can link repeaters locally and through the Internet for routing voice, email, maps and other data, world-wide.


The local WORC D-Star system consists of three D-Star voice repeaters and one D-Star data repeater. Stations can transmit a location locally and it will appear on the maps and station lists of local FM APRS stations.