The Cascade Subduction Zone consists of three tectonic plates; The North America, Juan de Fuca, and Pacific Plate, all are moving with different trajectories. Plate tectonics describes the motions of the 15 to 20 large rigid tectonic plates in the Earth’s outermost layer. Faults are cracks within the Earth’s crust where rock, due to the build up of stresses, periodically breaks and moves, releasing seismic energy in an earthquake. 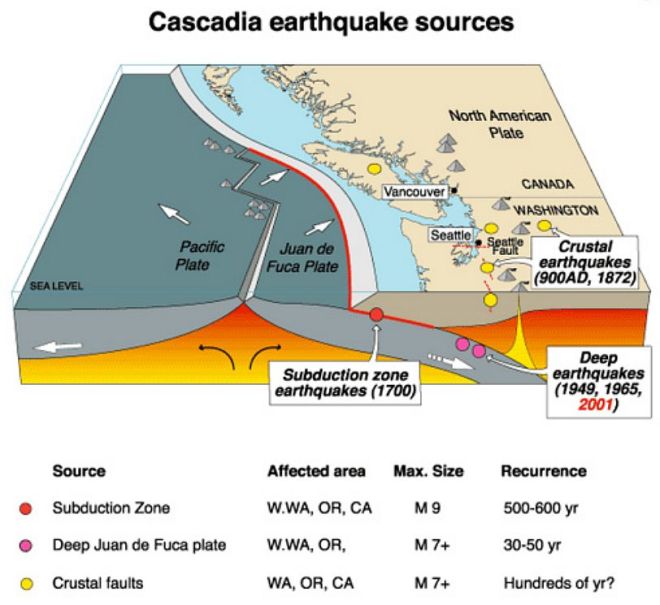 Beginning in 1969 with five seismometers, the Pacific Northwest Seismic Network has grown to more than 300 seismograph stations distributed across the region and has become the second largest seismic network in the United States. 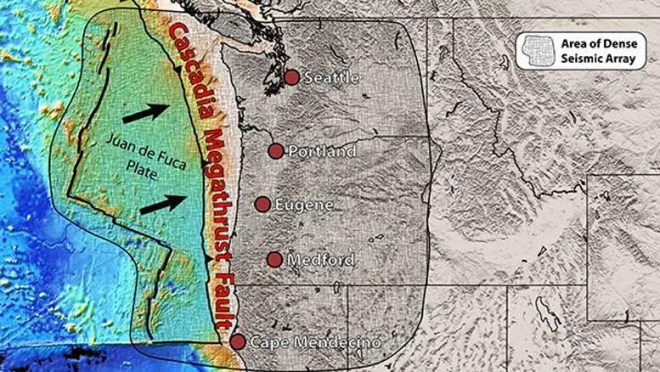 The 620-mile subduction zone, which hasn’t experienced a massive earthquake since 1700, is where the Juan de Fuca ocean plate dips under the North American continental plate. The fault zone stretches just offshore from northern Vancouver Island to Cape Mendocino in northern California.


Subduction Zone earthquakes are the largest earthquakes in the world, and are the only source zones that can produce earthquakes greater than Magnitude 8.5. 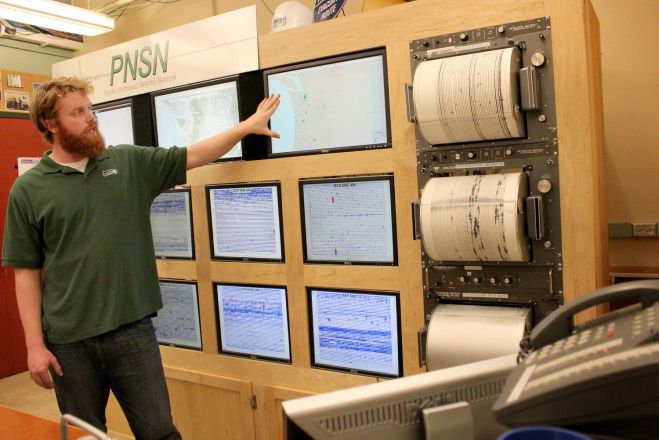 Geology and oceanography have come together this year in the Ocean Observatories Initiative, an unprecedented new tool for monitoring our coast. It will improve the already comprehensive seismic network throughout the Northwest and California.

Brian Atwater found evidence of repeating full rip subduction zone earthquakes on the shore. Atwater linked the evidence of the 1700 Cascadia earthquake on the West Coast on January 26, 1700, to the tsunami arrival in Japan, that hit some 24 hours later. 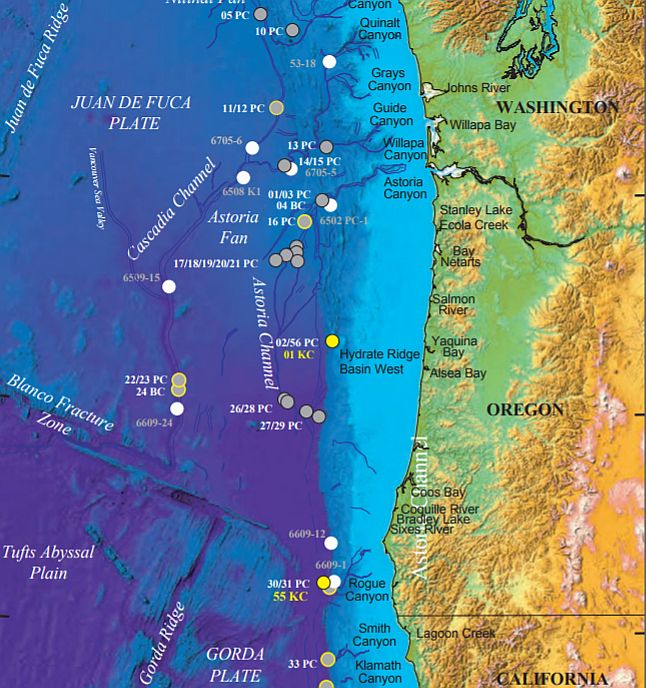 But in addition to the full rip, Goldfinger found another 21 past earthquakes in the southern Oregon coast.

The geologic evidence of nineteen subduction zones over 10,000 years is about every 500 years. About every 250 years if you count the smaller, southern Oregon subduction events. Since we’re about 317 years since the last (big) subduction event in 1700, the southern coast looks overdue. But a full-rip, 9.0 event could also happen relatively soon. Nobody knows when, but it WILL HAPPEN. 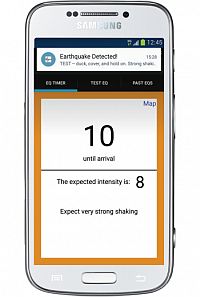 
It might give Seattle and Portland as much as three or four minutes’ warning for a big offshore quake near the Bay Area, and as much as 30 seconds for an earthquake on one of the onshore faults. But there’s no funding to make it public. The Cascadia Region Earthquake Workgroup has more. Here are the Latest Earthquakes in the North Pacific. 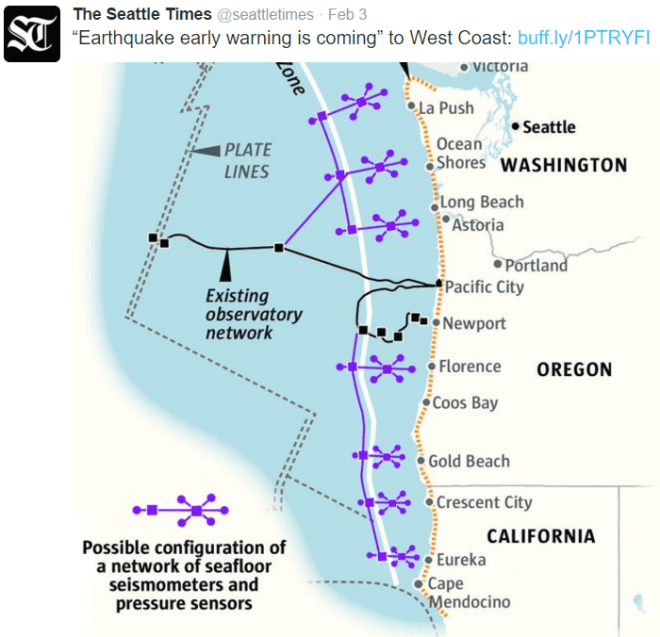 UPDATE: A $3.6 million grant from the Gordon and Betty Moore Foundation, is kickstarting an early-warning system now being tested in the Northwest and California.

The Cascadia Initiative (pdf) is assembling a much more complete scientific picture of the Northwest’s most dangerous fault — including what to expect the next time it ruptures. It’s deployed more than 60 ocean-bottom seismometers and pressure gauges and is now receiving a “live” profile of events off our coast. 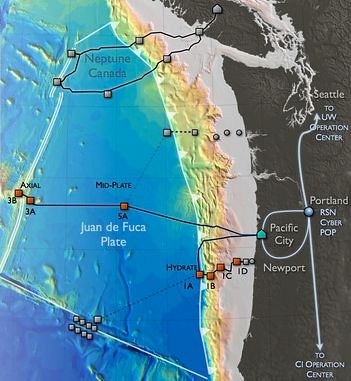 The Ocean Observatories Initiative has wired up the west coast, from California to Canada. It’s the most extensive ocean monitoring system yet devised. Rutgers plans to hook up their ocean observatory to similar projects on the East coast and will deliver OOI’s Cyberinfrastructure. Woods Hole, Oregon State University and Scripps are responsible for the OOI coastal and global arrays and their autonomous vehicles.

Sensors on the Axial Seamount on the Juan de Fuca spreading center are now live. Axial is the most active volcanic site in the North Pacific.

Join the crew on the April-May 2015 Axial Seamount expendition, mapping, and sampling the new lava flows from the 2015 eruption. In the summer of 2014, Bill Chadwick and colleagues correctly predicted that Axial Seamount would erupt in 2015. 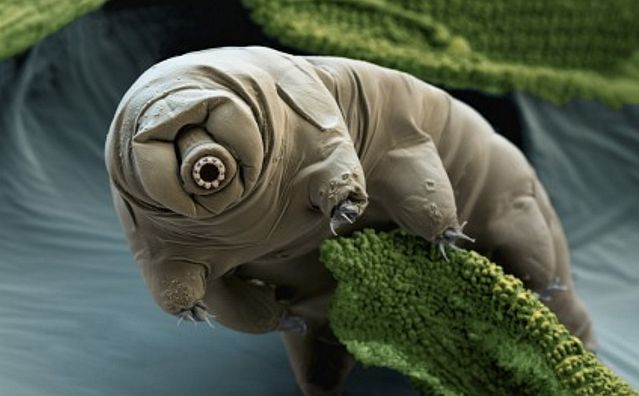 Maybe they’ll bring back some hyperthermophiles, one of many weirdly amazing extremophiles. They can live in temperatures above boiling, in crushing depth and blackness. They’re surrounded by sub-freezing water kept liquid by immense pressure.


How did they get there?


LUCA, the Last Universal Common Ancestor of Life on Earth may live in the Main Endeavour Vent Field.

CRISPR was named Science’s Breakthrough of the Year. The “molecular scalpel for genomes” can edit the DNA of fertilized human embryos and has already helped create a menagerie of genetically new organisms. MIT’s Technology Review calls it “the biggest biotech discovery of the century“.


Getting a piece of extremophile DNA back to the lab might enable patented bio-engineered life forms with extraordinary characteristics (Ted Talk). We’re in international waters here.

John Delaney, father of deep-sea, fiber-fed observatories, explains it all.