According to the Oregon Resiliency Plan, Oregon (even the nation) has never witnessed a disaster of this magnitude. Food, shelter, water, transportation and communications will all be affected.


Six months after Hurricane Katrina, only 38 percent of New Orleans residents had returned to the city, only half of the debris had been removed, and only one third of the city’s structures had working electricity.


What can you expect from a big quake? Broken water pipes, downed power lines, highways and bridges impassable, people trapped in elevators, derailed trains and head injuries from falling objects. The degree of disruption will vary. 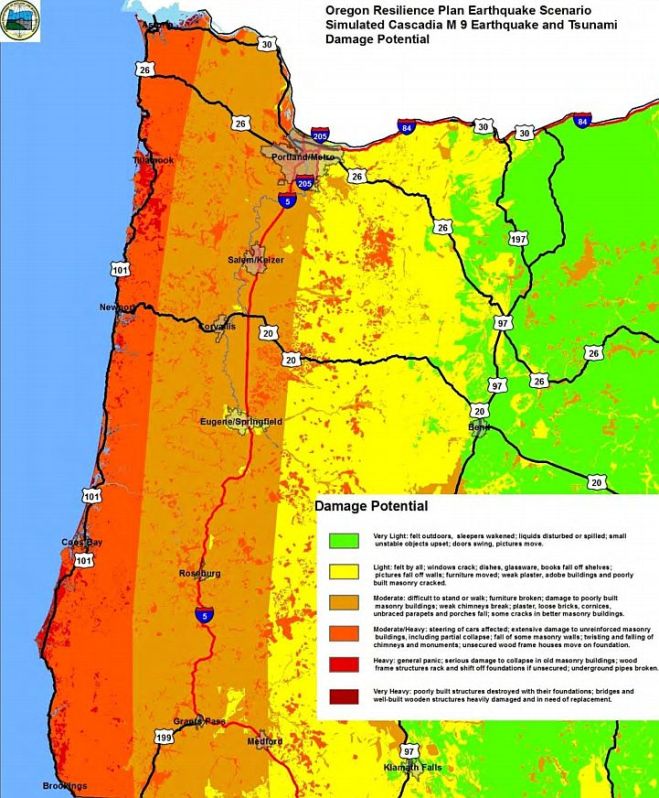 Some utility interruptions will last 1-3 days, while others may be out for 18 to 36 months. Both businesses and citizens should plan on being self-sufficient for longer than 72-hours. The advise now: get your ass ready for 2 weeks of no power, water or food. Are you prepared?


Some people will heed the advise of preparing a 2 week emergency stash. Some won’t. You won’t be able to call 911, and no responders will likely be available for days. This is YOUR life and YOUR FAMILY’S LIFE we are talking about here. Okay? Just think about it.


That’s all anyone is asking.


More than 90 percent of Oregon’s fuel reserves near Linnton are expected to go tumbling into the Willamette River, and we get most of that fuel from Washington’s Olympic Pipeline. So the expectation is that there will be no gas available for private citizens for months and very little phone connectivity – even in Eastern Oregon.


The last thing you want to do is waste that gas by heading somewhere only to find it’s completely impassable and you’re going to have to abandon your car there. Probably the best thing to do is stay near home for at least 3 days to 2 weeks. 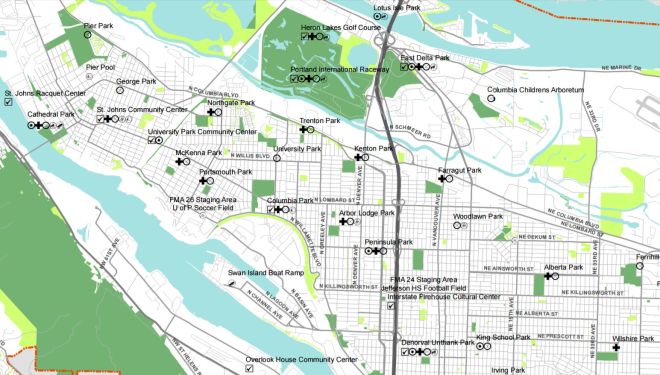 If you had to re-locate, where would you go? What would you do? What would you take? It’s worth considering. Staging areas in locations such as PIR or East Delta Park might be used for temporary shelter, communications, food and emergency medical response. But basic utilities and gas are likely to be out no matter where you drive. 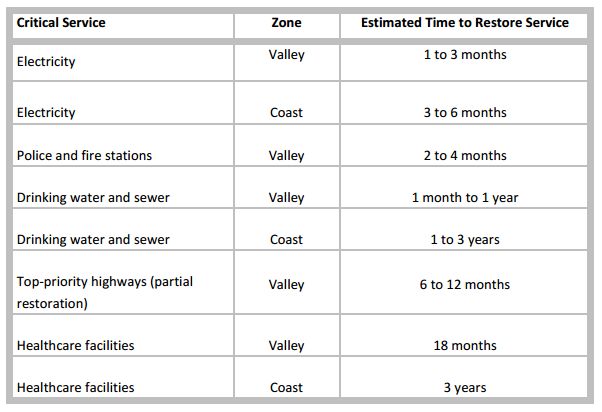 Based on the findings of the Oregon Resilience Plan, the harsh truth is it won’t be business as usual. If the earthquake were to happen tomorrow, they estimate time to restore function would be:

That’s a disaster. But everyone’s situation will be different. 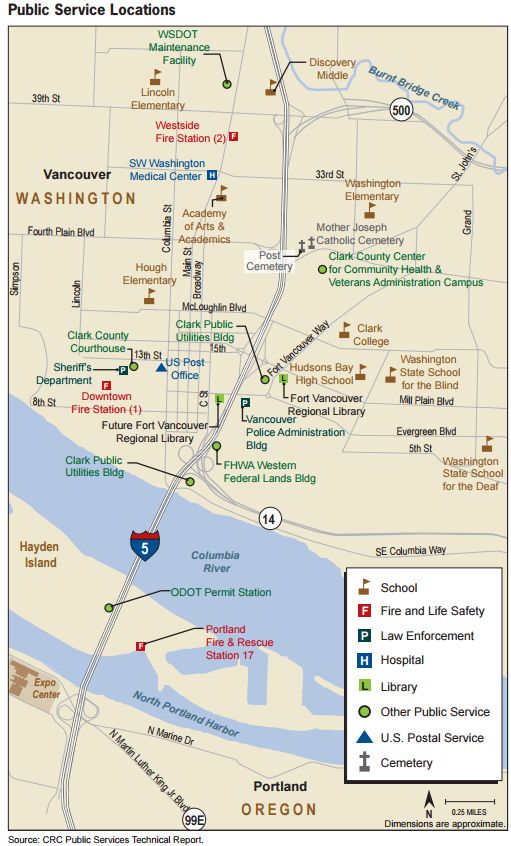 Maybe you and your loved ones will be fine. Maybe your work place won’t. On Hayden Island, shelter, transportation, power and sewage could be major issues. Shelters with water and limited communications may be set up in schools and other locations nearby. 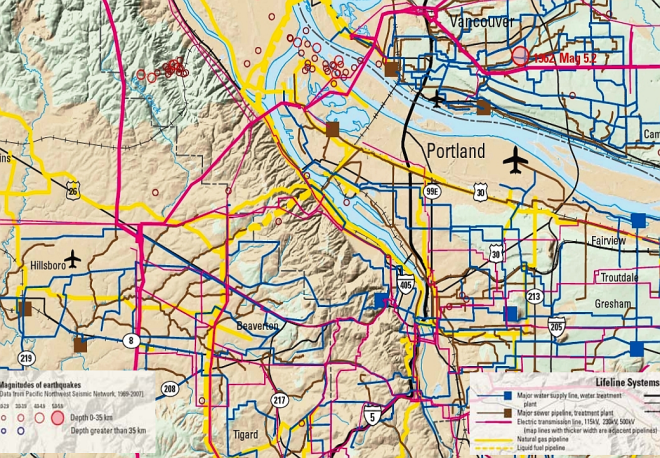 Should you stay or should you go? It depends. The Oregon Resiliency Plan indicates Portland will suffer moderate to heavy damage. You can deal with moderate damage, can’t you? But what about longer term? 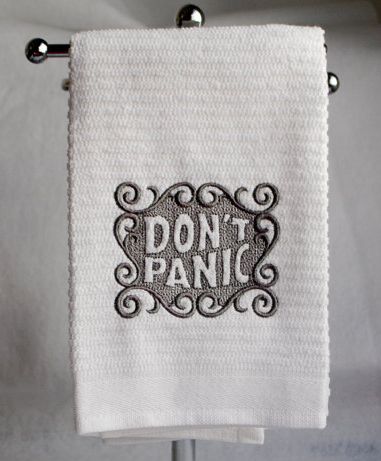 
On Hayden Island, your residence may only have light damage and remain structurally sound. Great. You might shelter in place. You’d be lucky, since liquefaction will be a big factor here. But consider that there may be aftershocks for weeks and others who aren’t so lucky. 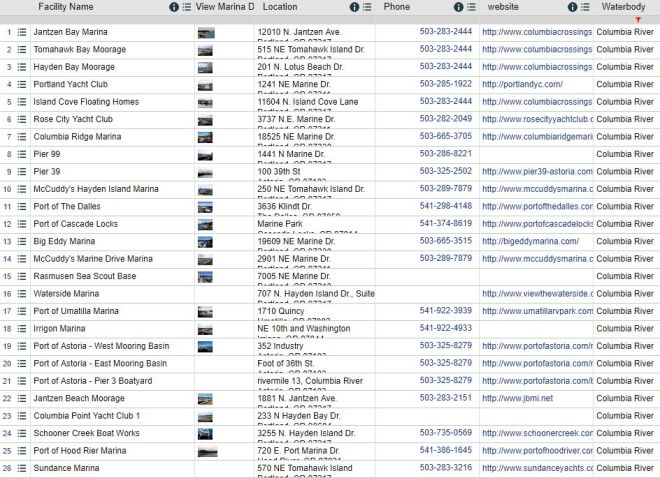 Leaving the island (by boat) may be an option, but you can’t bring more than a backpack to a shelter. And where would you go? Neighbors may be your best resource.

You’ve got a disaster kit with camping supplies, food and a first aid kit, don’t you? Good. You’ll be okay. If you need help, get a message to the nearby BEECN communications tent. Remember, people on the coast have it a lot worse then you. Deal with it. Probably the best thing you could do for yourself and others is to help your neighbors.


State designated emergency shelters are commonly schools and churches (which Hayden Island doesn’t have), followed by community centers that can hold many occupants. Local hotels and commercial buildings (such as mattress stores) might be used as temporary facilities. Today, most big-box stores use tilt-up concrete structures with light-framed wood or steel roofs. Buildings of this type that were constructed prior to 1995 have historically not performed well in earthquakes.


Power
BPA studies indicate that their main grid would require between 7 and 51 days for completion of emergency damage repairs after a magnitude 9.0 Cascadia earthquake. Electricity (and gas) for heat, light, refrigeration, communications and other essentials may not be available…for days or weeks. Emergency generators could supply limited power to shelters, work areas and other facilities in a few days. But gasoline might be scarce. Solar panels and batteries would be helpful but the need would likely far exceed their capacity.


Camping at home for a week without power wouldn’t be a vacation. RVers on Hayden Island are probably the best prepared to “boondock”. Ask them for advice. They’re the experts. Here are 11 campgrounds close to Portland if you want to get away from it all.


Transportation
Because U.S. 101 is expected to be impassable, I-5 will become the critical backbone after the earthquake. Emergency support may be staged along the corridor. A majority of bridges and other transportation infrastructure in western Oregon are susceptible to serious damage, particularly the Columbia I-5 bridge. 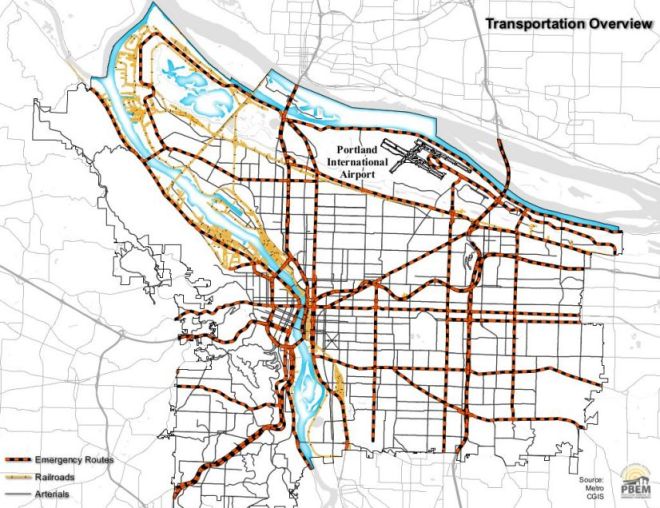 A Tier 1 route, such as I-5, is expected to be resilient within three days (at least for emergency vehicles), whereas a Tier 3 route may take up to four weeks. Initial help for impacted coastal areas will come first from cities along I-5 and later from the rest of the state. The bridge may be impassible. Say hello to Watertaxis. 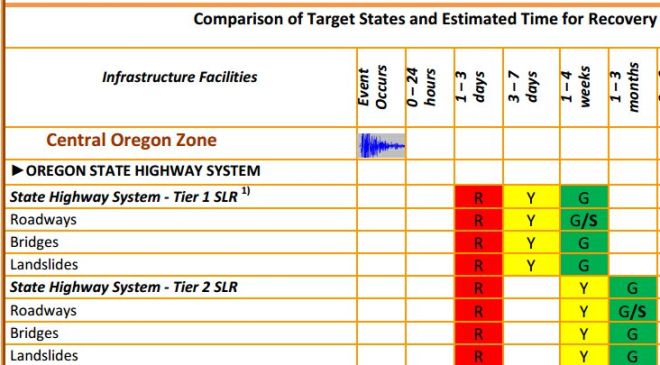 Transit agencies may play an important role. TriMet, in conjunction with school district buses, may assist with emergency evacuation. 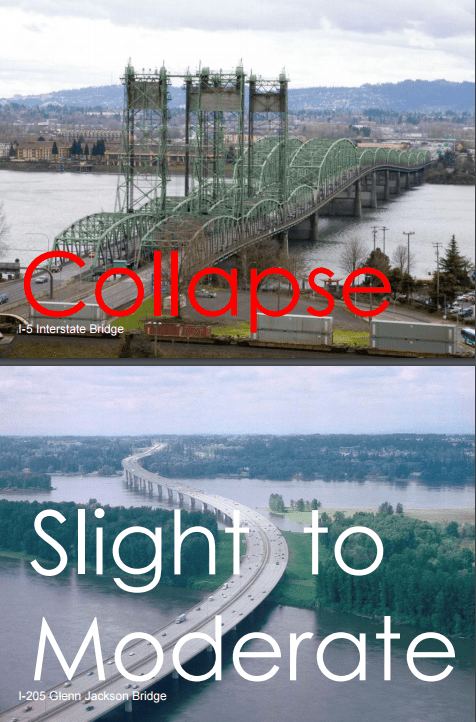 
Water
Hayden Island is surrounded by water. But a Cascadia earthquake would result in catastrophic impacts to existing water and wastewater systems. Oregon’s pump stations along marine drive and waste water treatment plants, just south of the island, will subject to damage from liquefaction. Concrete and cast-iron pipe will likely fail and leak in hundreds of places around the region.


Emergency water supplies may meet only subsistence needs (for example, direct consumption and very limited bathing). For the first one to two months, water may be delivered via tankers to smaller tanks and bladders distributed throughout the community. People would wait in line to fill their containers and then carry the water home. Identification of each community’s backbone water and waste water systems is essential. Water to fire hydrants could take two weeks. Water service to homes and businesses could take considerably longer.


Figure at least one gallon of drinking water per person per day. A toilet tank and water heater can supply emergency sources. A $20 water filtering gadget, often used by campers, might be good to have in your emergency kit. Threats to public health and safety are expected to exist for one to three years on the Coast and six months to a year in the Valley. Clean water is paramount. Job one.


Sanitation
If your flush toilet doesn’t work and the sewers are down, folks in your household will appreciate the comfort, hygiene and safety that come with a simple twin bucket toilet. It’s easy to make.

Two, 5 gallon plastic buckets, one for pee and one for poo does the trick.

A day’s worth of pee has almost 10 times the volume of poo. So the pee bucket will fill up a lot faster. A single bucket camp toilet would fill up quickly and the mix is a mess to deal with. It’s the poo bucket that contains most of the pathogens, but poo doesn’t take up much space.


Communications
Communications can’t be restored until roads and electricity are functional. A number of the towers and antennas, especially in Vancouver, are located on top of existing buildings. They will be only as reliable as the buildings they are on. Satellite phones, ham radio and walkie talkies may be the only reliable communications options in the first 72 hours. Cellular service may be restored relatively quickly but capacity will be constrained with demand high. Texting is better and more reliable than voice. Internet connectivity might be more likely to come from the Vancouver side since it’s closer for a microwave backhaul.


Landslides
While Hayden Island doesn’t have hills, a river bank, 15-20 feet high, surrounds the island. In the event of a Cascadia earthquake, that river bank could be subject to landslides. A landslide may especially impact floating home residents who would have difficulty getting in or our of their homes. Utilities such as water, sewage, electricity, communications lines and gas pipes may also be damaged in the event of landslides.


Long ropes and life preservers might be useful to haul stranded floating home residents up the bank. Many floating homes have boats, however, which would likely be an asset in such an emergency.

The Statewide Landslide Information Database for Oregon has maps with overlays. Here’s a Homeowners Landslide Guide.


Summary
If you’re prepared to hunker down for 72 hours (three days), then give yourself credit. You’re ahead of the game. But there will likely be long term hardships with a really bad Cascadia full rip. Utilities could be out for weeks or months. A two week stash of emergency supplies, a family plan and a backpack or two of emergency supplies is now recommended for everyone.


It’s not the end of the world. The Big One may only cause moderate damage on Hayden Island and a temporary disruption in service. Nobody really knows. Plan for a worst case situation. Have lots of comfort food, lots of games and books, and small toys the kids enjoy. They’ll have a story to tell the next generation.


The American Red Cross says training and awareness is the best defense. Having prepared for the worst, we can be our best for our family, friends, and community. We will be stronger and better for the effort.


Don’t stay up all night worrying about what might happen. Anything might happen. You’ll probably be okay. Maybe some things will fall and break, the power may go out and wastewater may be a problem on the island, along with bridge traffic. But bridge traffic is always a problem. 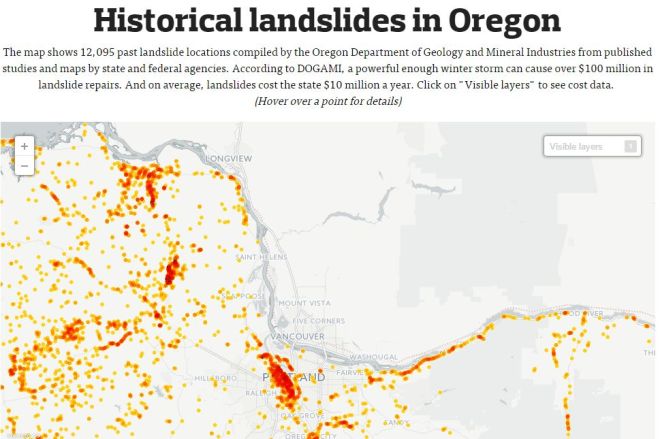 Remember, landslides closing Interstate 5 and I-30 happen all the time. Landslides, downed trees and power outages affecting tens of thousands of people are routine in Oregon and other states. Our friends and neighbors are our best resource. We will survive.