A 30 foot Tsunami wave could inundate much of the low-lying coast just minutes after the shaking stops. Some 30,000 Oregonians live in the coastal tsunami inundation zone of a M9.0 earthquake. Run, don’t drive, to higher ground, says Kevin Cupples, the city planner for the town of Seaside, Oregon. 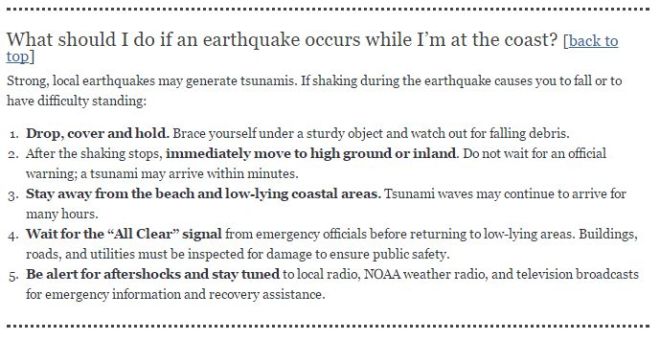 On the coast, go to high ground immediately, advises Oregon Geology, at least 15 m (50 ft) above sea level. Go inland away from the ocean as far as possible. If you are unable to evacuate but are near a multi-story, reinforced-concrete building, go to the third floor or higher.

The Pacific Tsunami Warning Center, in Hawaii, issues Tsunami warnings minutes after the event. If the undersea event is thousands of miles away, it can take 4 hours before the Tsunami arrives.

Oregonians may not be so lucky. The “hot zone” is not far off our coast. A tsunami wave off Oregon’s southern coast (more typical) may take a little longer to arrive, but if the whole Cascadia margin “rips”, a Tsunami could hit in as little as 10-15 minutes. After the initial ground shaking, survivors may have just tens of minutes before the first wave makes landfall.


The ground could also fall as much as 6 feet in places, making roads unreliable. If you must, climb to the top of a 3-4 story concrete building. 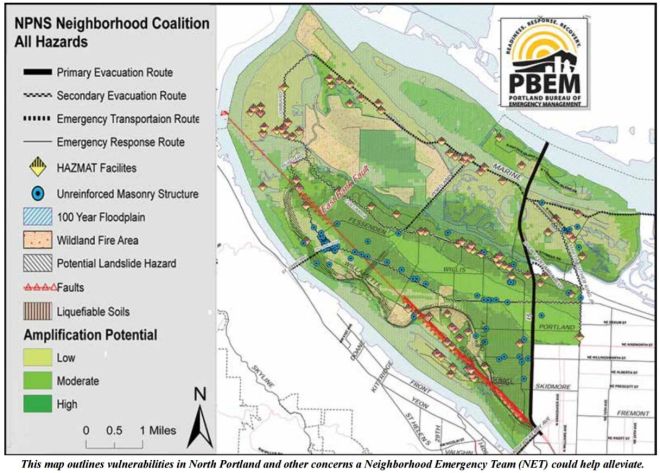 Assuming the 30,000 residents are present at the time of the initial earthquake and begin evacuating the tsunami zone at a slow walk, as many as 6,000 residents may be unable reach higher ground before the first wave hits according to studies by the State of Oregon. 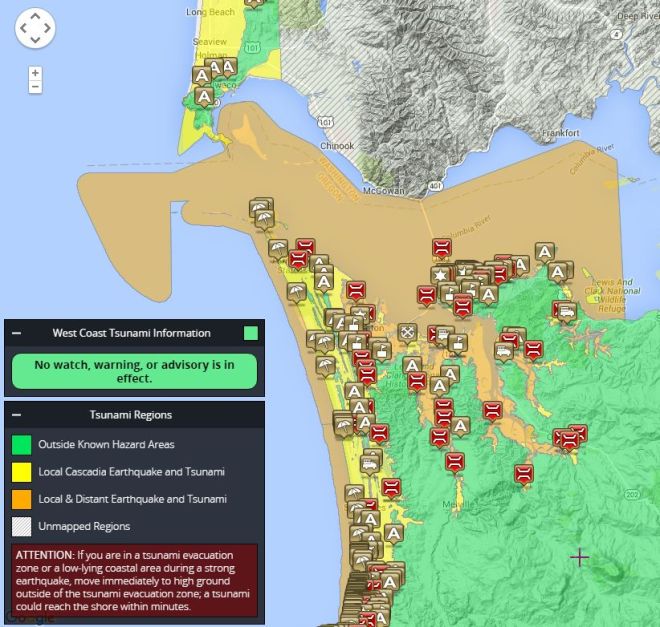 Tsunamis are primarily a coastal event. Any tsunami would be largely dissipated 50 miles up the Columbia River, well before Longview, Washington, and likely just a few miles beyond Tongue Point, just East of Astoria. 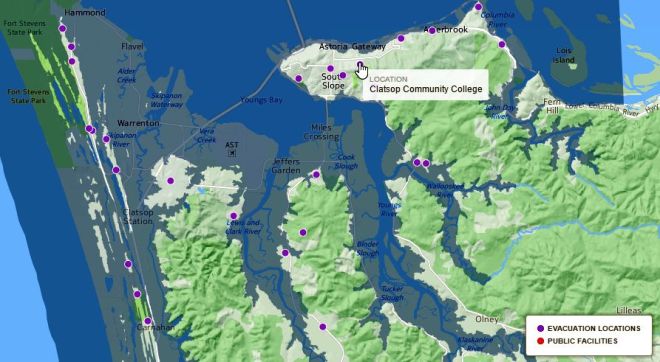 The Oregonian’s Tsunami Maps show Evacuation centers on the coast.


Hayden Island residents are unlikely to experience any Tsunami effects, but would likely feel severe shaking, liquefaction, moorage instabilities, bank landslides, and high currents which can damage ships and piers, according to Oregon Geology.

Liquefaction
Liquefaction is a phenomenon whereby soil behaves like quick sand in response to earthquake shaking, because water is forced out and lubricates the soil.


Liquefaction may be Hayden Island’s biggest issue causing home foundations, power poles and natural gas/water pipes, to slide around A LOT. That means no water, power or gas, probably for weeks. Manufactured homes may be split down the middle since they’re not fastened to a solid foundation. 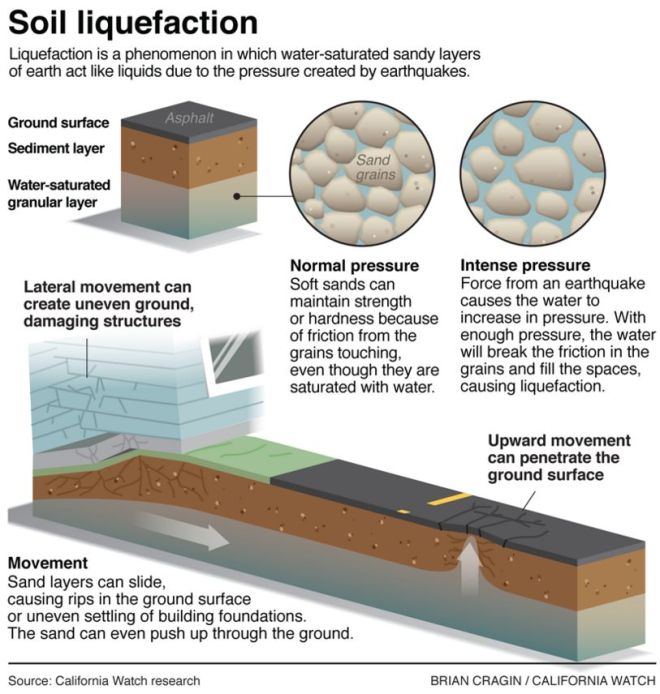 Liquifaction is most often observed in sandy soils (like those of Hayden Island). Portland International (PDX) sits on soil prone to liquefaction while FEMA’s primary backup, Redmond airport (RDM), is 145 miles southeast. 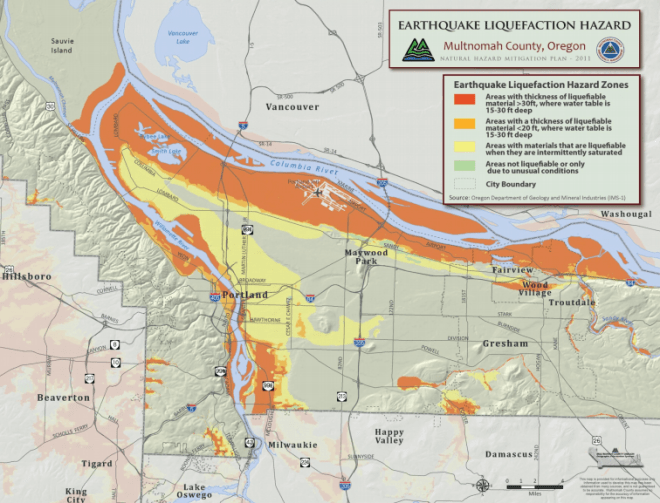 Much of Portland is prone to liquefaction, says Yumei Wang, who leads the Geohazards team at the Oregon Department of Geology. Huge swathes of land along the Columbia River, including PDX, are at high risk as are most of the Willamette River’s banks. 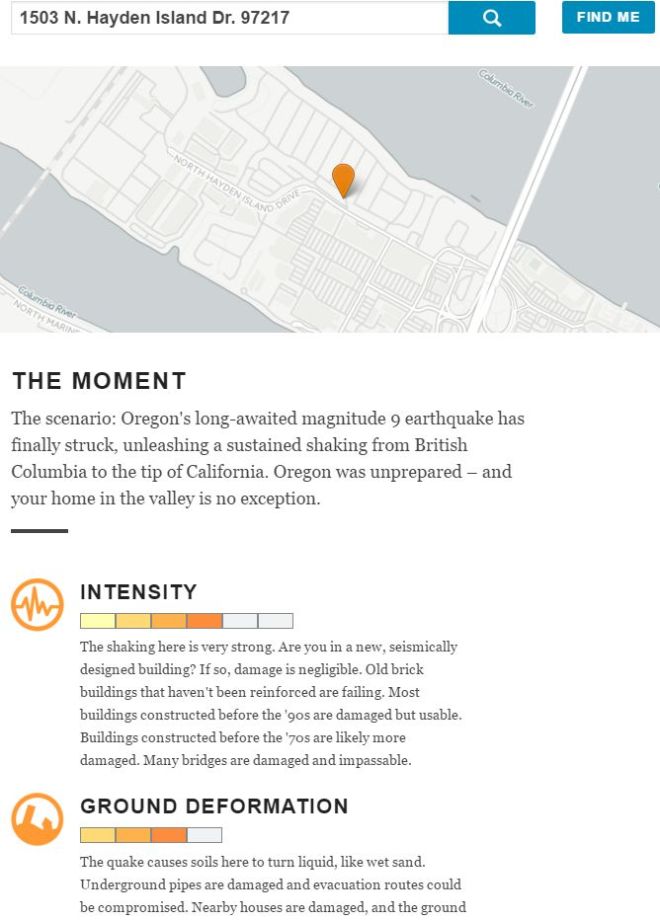 Portland’s map of unreinforced masonry buildings shows nothing on Hayden Island. Downtown is the trouble spot. OPB’s app lets you enter your Oregon address for a custom report on your seismic risks and how to prepare.

Hayden Island Impacts
Hayden Island is built on dredged mud and sand from the Columbia River. It will be subject to severe liquefaction. 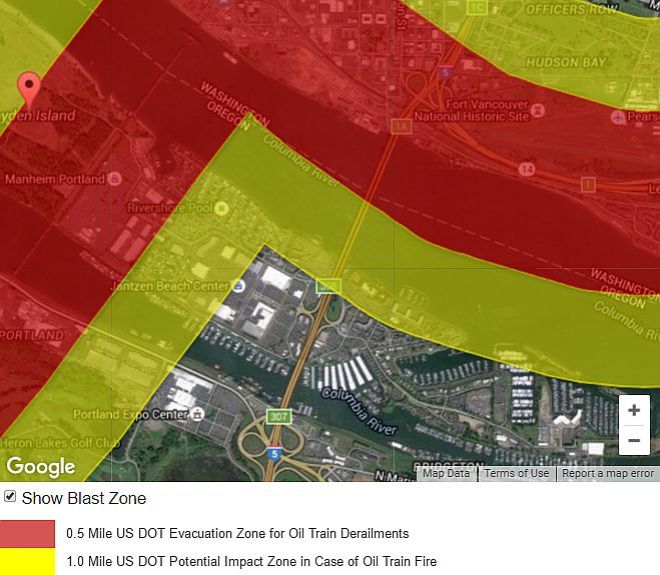 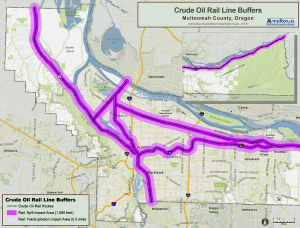 The Oregon Fire Marshall recommends that in the event of a large oil train incident/spill, downwind evacuation should be at least 1,000 feet and if the car is involved in a fire, evacuation for 0.5-mile (800 meters) in all directions is recommended. That would be much of Hayden Island if the BNSF mainline in Vancouver is affected.

The Oregonian created this Google Map flyover of the 3 routes Pembina could take through Portland to transport their propane trains (every other day) to the Port of Portland’s Terminal 6. The orange overlay is a mile wide evacuation zone required by regulators in case of a derailment. 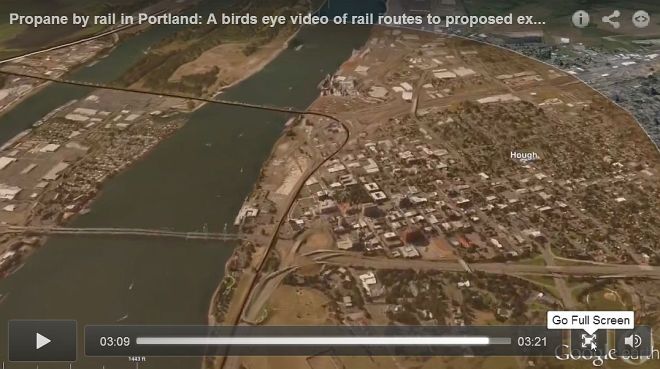 BNSF’s route through Vancouver carries most of the Balken crude north to refineries in Pudget Sound. Oregonian’s flyby shows evacuation zones in red (.5 miles either side of a fire). A derailment and fire in Vancouver would result in evacuation of most of city.


How much of a risk island residents and visitors may face from earthquakes, liquefaction, landslides and oil/gas spills, nobody can say for sure. Earthquake prediction is not a “thing”.